Following on from my last blog, my hope of things improving quickly didn’t really materialise. Although the Christie and myself were in agreement that it was probably the antibiotics that had helped to screw things up. So as there seemed to be no let up in my symptoms, arrangements were made for me to go in to have my next jab at the Christie so as all my normal tests and a couple of others could be done, as well as a CT, just to make sure there was nothing else going on. That way everything would be there reviewed and ready for my consultation in September.  So much for no more scans until November!

To say I was feeling really fed-up and emotional is an understatement, I was eating painkillers like there was no tomorrow, and had set various alarms on my phone to make sure I took the right things at the right time, and didn’t overdo any of them.

I was also determined I was not going to miss the Snowden weekend, even though any healthy walking activities were clearly off the agenda for me.   By behaving myself and not overdoing it, and by this I mean being completely bone-idle, I felt well enough to go. It was great to see everybody, have a good catch up, and celebrate this years crop of special birthdays and anniversary’s. Left to my own devices on the Saturday, I read and did some knitting, but felt a bit mad that my energy levels remained low. I did though, get to relax in the best room at the hotel, whilst everybody swanned off for the day, thanks to Don & Jan letting me use their room. We had our usual room, which is great but not somewhere to spend a day!!

Unfortunately though I was ill on the way home, my cramping decided to go for it big style, which resulted in me being back in bed until the Tuesday. I was not impressed as I had not knowingly done anything to justify my body continuing to react in this way. On the Wednesday, I dosed myself up for the journey to the Christie, to get my tests, jab and CT. The only problem was, I was a week early for my CT, they did try and see if they could fit me in, but unfortunately there were no slots. I felt a right numpty, and of course got upset again. When I was able to rationalise it sensibly, I realised that I had just focused on the day and not the date.

Thankfully on Thursday morning I did actually wake up feeling a little bit better, still over emotional though (even the MacMillan cancer advert had made me cry), bloated and cramping, but the severity was less. Saturday I had my renal scan, they said that my kidney function was good, which was a relief,and I will get the full results for that in a couple of weeks.  My symptom’s continued to improve, and by Sunday I was heat-pack free.

On Monday I even did some housework, as not much had been done over the last three weeks, and tackled the ironing. Now I hate ironing, and will avoid it for as long as possible.  So the fact that I did it, was I knew a good sign.  Tuesday, I was back doing my volunteer work and we went out for tea, and I said how I was finally feeling more like the real me again, Ade informed me that it was nice to have the real me back, I was even looking like myself again. It seems that over the last few weeks I have at times looked a tad greyish.

Yesterday I had my CT, via a quick visit to the Marks and Spencer sale, and yes I did make a couple of purchases. They also had a lovely blue leather biker jacket that was in my size, and it was the only one, but even in the sale I couldn’t justify the cost, so I made a quick exit before talking myself into it. More about that shortly…

The scan was very straight forward, and apart from having to sit around and drink the contrast drink we were straight in and out. The nurse confirmed as well when going through the questionnaire before putting in my catheter, that the blood test for my kidney function was good, which was nice to hear after the comments following my renal scan.

Now back to the jacket. On the way home, we picked up Ade’s car from his work, and usually go home different ways; Ade goes M6, I go A500. This time Ade went A500 too, which I thought was a bit strange, he even let me overtake him so got in after me, and when I asked him why he told me it was because he needed petrol.   This morning I found out that he was telling porkies, my lovely man had been to buy me the blue leather biker jacket, as there it was hanging in the bedroom when I woke up. Needless to say there were more tears, but this time they were happy one’s. 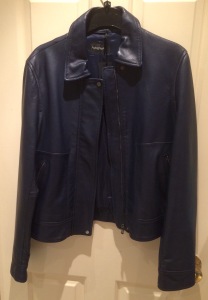 I am one very lucky spoilt lady, and the jacket clearly had my name on it too.

6 thoughts on “Not quite as in control as I think…”