It’s been a busy, fun and tiring few weeks, and I wouldn’t have missed it for the world:-)

I re-joined the gym, in an attempt to keep fit, starting with swimming, yoga and pilates. Two weeks in and I strained my knee doing pilates of all things, so think I will be giving that particular class a miss in future!

I also got to see one of my favourite bands for the first time, Simply Red, in Manchester.   A bit late I know, but during their heyday I was bringing up a young family, so there was very little spare time or cash flying about for fripperies like that. I can honestly say though that they were worth the wait, loved every second of it, and we were dancing in the aisles. Manchester though was it’s usual wet self!!

We also did the Christmas German Market whilst there, which I can honestly say was not a patch on the Birmingham version. Couldn’t even blame it on the weather as it rained when we were in Birmingham too. Did manage a very nice breakfast though at the ‘Fig & Sparrow’ on Portland Street, it is only a small café, with shared bench tables and a simple menu, but the food and atmosphere are great, and it is fast becoming a favourite.

We overslept though on the Sunday morning, I haven’t moved that quick in a while to get out of a hotel room!! Needless to say that when I got home I was shattered, as I had had to power through the weekend even though we kept it low key, due to post jab tiredness. So I was looking forward to a lie in on the Monday, but had I forgotten all about the chimney sweep coming to service the wood-burner. So that was another rude awakening for me. Needless to say the next couple of days I was fit for nothing, feeling very weary, getting lots of stomach cramps as well as nauseous at times. Then the madness really began!

Decorations were put up, then I had two hospital appointments on the 21st, consultant in the morning for prescription and MRI in the afternoon. Food shopping was finished for all the over-indulgence looming on the horizon, and cooking started. Our youngest was home from university, oldest daughter and her husband arrived from Canada on the 23rd, and yes I did cry when they arrived. Oldest son and his other half arrived on Christmas eve.

The house was filling up nicely, the extra bonus being that our grandson was with us for his first Christmas dinner. The christmas picture was taken and as we were Skyping Canada we got them in on the photo too:-) Christmas night as always we played Buzz on the play station, and as hubby’s main competition had left he won. Then we played the card game ‘Cards against Humanity’, very addictive, but not for the feint hearted.

Boxing day is a quiet one for us, hubby went to the match (Stoke v Man Utd), I stayed in bed late, and was tired and emotional when I got up, got very sad about the last few months, which happens from time to time.

To clear our heads and get a bit of practice in for the following weekends sponsored walk, we took a steam train ride on the Churnet Valley Railway, and walked back. It was a good four miles and a lot muddier than expected, even though we were on the canal towpath. We were so looking forward to some food at the end of it, got to the pub and there was a sign saying no food today. We were gutted and starving, luckily the Indian restaurant was open when we got home.  There is only so much turkey I can eat.

It was also our turn to host the New Years Eve party this year, and we always have a fancy dress theme. This year it was cartoon characters, and we were Fred & Wilma. As we couldn’t get hold of a blow up Dino, we had a 6ft blow up Dinosaur on the porch to greet everybody!! However, he was outside on the porch so only took one picture of him until the next day, when he went to bed. ..  There was an Incredibles Dance off with Bart, and as for the quiz, the less said about that the better. 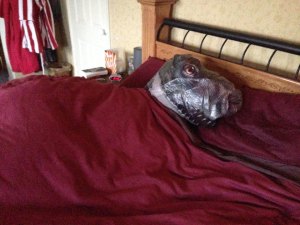 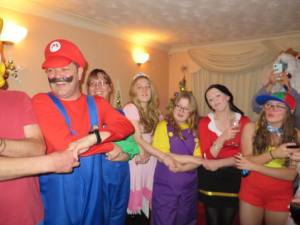 News Years day we got up to wave Jordan off at 08:30, as he had to go back sooner than Ruth, then went back to bed, and before I knew it Saturday was here, and it was time to walk again (I did get up again later New Years day by the way). Luckily the heavy rain held off, it was a bit wet and muddy in parts, definitely not the weather for walking in a onesie.  There was a great turn out from my wonderful family an friends,and we managed to do 9 miles. More importantly due to everybodys generous sponsorship we far exceeded our target. There is still money coming in too.

Sunday, Ruth and myself went off to Edinburgh for a couple of days, it was lovely to have some time alone with her before her return to Canada. We didn’t do a great deal as we only had one full day there, but we did manage a ghost walk, the open bus tour, and had a great laugh in the dungeons.  I also had the best gluten free pizza I have ever had, and even managed to persuade them to let me have the recipe for the base:-)  There will be more on that later.

All to soon it was Friday 8th Jan, and time to take Ruth back to the airport, and yes I cried again, but not too much. As hopefully we will see them again at the end of June, so fingers crossed for my scan results on the 18th.  Now for the next few days, I will be doing mostly nothing!!