Well it has been a while, so I thought it was about time I got my finger out.  It’s not like me to be quiet, but is has been a busy few weeks.  Just after my last blog I was laid low with a urinary tract infection, not something that I am unfamiliar with, but this one took three lots of antibiotics to get it cleared.  Luckily this time it wasn’t antibiotic resistant like the one I had at the beginning of the year, but it did knock the stuffing out of me for a few weeks.

Then on the 13th November, we went to Birmingham for the day as the Christmas Market had just opened, and it was our wedding anniversary.  It was a lovely day, the market was great, the weather was good and the buskers! Taster video below, enjoy🎤🎸

It will definitely be a day to remember though, as that night the Paris terrorist attacks happened, such a dreadful thing, I cannot imagine the fear the people of Paris must have felt as we watched events unfold from the safety of our home.  The stoicism of Paris in the aftermath was something to be greatly admired, as everybody pulled together no matter what their religious beliefs were.

This was then followed by a wedding, and a funeral.  One of my sons closest friends from university got married, and we were delighted to be invited and catch up with all his old friends, their partners and children; many were regular visitors during the university years, usually on a Sunday just in time for Sunday lunch!! It was a busy weekend, great fun and very tiring.  This was closely followed by two trips in one week to my old home town of Ashton-under-Lyne, firstly to meet up with my sisters for lunch, this had been a long standing arrangement, then back two days later for my brother-in-laws younger brothers funeral.  It was very sad, Steve was only 6 years older than me and I have known him since I was 5, unfortunately he had oesphogeal cancer. Such a lovely guy and far to young to die.

In the midst of all this I was doing lots of paperwork, as I had decided that if I did not need to go back to work in the New Year I would not. Luckily for me I have salary security insurance through work, but there were forms to fill and evidence to gather, and no guarantee that I would get it.  Last week I heard that would get it, I cannot tell you what a relief that was, but it was also tinged with sadness, as I enjoy my job, and I will miss my colleagues😔.

As well as being a team, we are also friends.  However, I do have the option of going back, if further down the line I feel I can.  What I will not miss are the early starts and the long drive, especially at this time of year.  I did make the team meal last week though, and it was great fun.  Its not often we all get the chance to get together outside of the office and socialise, but it was a good night full of good food and drink and lots of laughter, a few pics below.   I intended to be a regular visitor, just to check up on them all and get the gossip, whether they like it or not!! 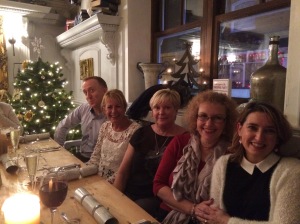 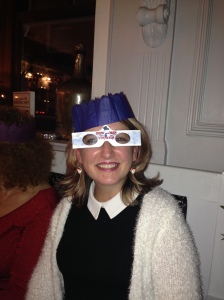 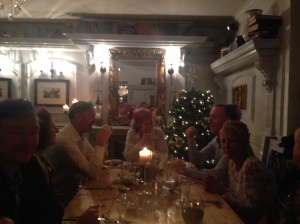 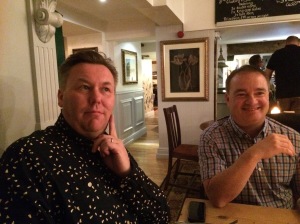 Finally I am now in the middle, like most of you, of the Christmas preparations🎄🎅, Ade flew solo with my injection💉 and did good, and my zebra onesie arrived for our sponsored walk on the 2nd January 🚶🏻, with a detachable tail, bonus😉 Here is the link to our Just Giving page if you would like to sponsor us, and help raise funds for the Net Patient Foundation.

Cancer is a Dancing Queen