Following on from my last blog there has been a bit of a bigger gap than usual, and I have no valid excuse for that. Life has been jogging along at a nice pace, but the words just wouldn’t come. There have been a few times over the last couple of months that I have tried to sit down and write, and my notes were all there ready as a reference, and lots has been written with pen and paper in my journal, I just couldn’t quite find a way to convert them for my blog. Hopefully the dry period has passed, and my mojo is coming back.  Anyway here goes!

Even though I am feeling a lot better in myself post PRRT treatment, in that my batteries are lasting longer, the fatigue is less acute and my head is less muggy, my stomach still continues to complain, and I was quite poorly at the end of June beginning of July.  I accept that this is part of my life and on the whole I continue to manage it with pain relief and heat packs, it does however drag you down some days.  There are not many days when I do not need to resort to something, although to be fair I do seem to have avoided a full on major episode for a good few months.  Although neither myself or my medical team can say whether this is down to the PRRT doing its job, or that I am now managing my pain relief better or a combination of both?

Sleep also continues to be erratic, I can sleep like a child some nights and nothing will wake me, and still wake up feeling exhausted.  Other nights I cannot sleep for love nor money, yet when I get up in the morning my energy levels are fine.  What is annoying about this though is that it does not line up with the type of day I may have had, a busy day does not necessarily mean a good nights sleep will be had or vise-versa!  Having cancer, and I’m not just talking neuroendocrine here, definitely brings home the fact that the old rules no longer apply.  Those aliens that decided to invade my body a few years ago just don’t want to conform.

Anyway, lets get away from the cancer stuff and talk about the good stuffJ  It was great to see the sun out in July, but boy was it hot, I love a bit of heat but once it gets past about 24c I take cover.  The dog wasn’t impressed either, we did invest in a cooling mat for him, which he really likes, and was nice to be able to sit out in the evening and eat alfresco.

I am starting to socialize a bit more again as my energy returns, and as my regular readers will know I do enjoy getting as much time as I can with our family and friends. The last few weeks have been particularly starting with the weekend after my last blog was published, as we had the pleasure of seeing a Red Arrows and spitfire display, the local village school had won a competition to have them do a fly-by at their local school fete. I missed the Red Arrows due to a NET Natter, but I got to see the spitfire, which was very emotional, I wasn’t expecting that to happen.  My husband had found a prime spot in a local farmers field on top of some hay bales, and the spitfire went straight over us.  It felt like it was just for us. 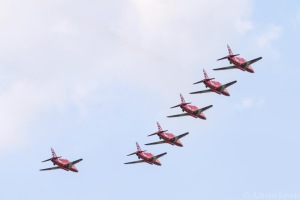 We had a weekend planned at the Whitehouse, which is in the Consall valley and was loaned to us by a family friend.  It is in a lovely spot between the Caldon Canal and the Cheddleton Valley Steam Railway, every year they have a beer festival and usually we just go for the day and ride the steam trains drinking beer.  Well everybody else does I am usually the designated driver as I don’t drink beer.  So this was my opportunity to partake of some other alcohol, I as looking forward to a nice glass of red wine.  You can imagine my disappointment when upon boarding the train I was told the wine had all gone, OK said me I’ll have a lager, only to find that when it arrived it had been brewed with wheat in it, so I couldn’t drink that either.  Next year I think it’s probably best if I drive again!!  Other than that though, it was a great weekend, the lads got plenty of fishing in, and on the Saturday night weather was good enough to eat outside, not quite a BBQ but near enough. In fact if you saw ‘Celebrity 5 go Barging’ 1stepisode, you will see the White House in the background at the beginning, as they started on the Caldon Canal at Froghall and stopped at the Black Lion pub, which is right next door. 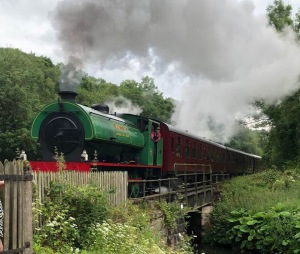 Then just after we got back, we had the saga of a flying ant invasion, one minute there was nothing, the next the living room was literally swarming.  Ade found them all and shouted me in, at first I thought he was over reacting, then I saw them, they had come in through the patio doors it was horrible.  They also finished off the vaccum cleaner, cleaning them up burned the motor out, I cant complain though it had given us 13 years excellent service.  We can get it fixed, and I may still do that, but I have had a new cordless one which is a lot light and more flexible in how you can put it together.

We also got to use our escape room voucher, and made it a family adventure, and apart from my niece Maddie it was a first for the rest of us.  Earlier in the day I hadn’t been to good, and needed the loo a lot, but thankfully things calmed down with a bit of help, and more importantly behaved during the game. We opted for the Witches & Wizards, and it was great fun, we only needed to ask for one hint near the end and we managed to escape with 2 minutes to spare.  I wont tell you what we had to do as I don’t want to spoil it for any future players out there, what I will say is that the one we chose had a 45% success rate, so were pretty pleased with ourselves.  Needless to say I think there is a very good chance we will do it again. This was closely followed by a trip over to Nottingham to celebrate our future son-in-laws birthday with a family meal at one of the oldest pubs there which is built into the side of the rocks, unfortunately we couldn’t stay for the rest of festivities visiting various hostelries in Nottingham Town Centre as my stomach was not in the best of moods.  But we have decided to make it the venue for our next Escape room adventure, which will include a tour of the city caves too, which are hundreds of years old, and acted as houses and businesses in centuries gone by.

Then before we knew it, it was time for the annual group pilgrimage to Wales, but this year we decided to have a change from Snowdon, and stayed at a very nice farm just outside Bangor.  It was a great venue and also had a big community room where we could all get together, and we made full use of that.  We ate there in the evenings, played games ( we managed 33 levels on Jenga) and music, and generally had a good time.  Also, as the weather was rather wet it turned out to be quite a godsend.  I did however manage to visit the copper mines at Great Orme in Llandudno with Neil & Janine, which was really interesting. They were discovered by accident when they decided to build a car park on the site, and proved that we entered the bronze age a lot earlier than was though.  If you would like to know more follow this link Great Orme Mines.  We finished the weekend off with a trip over to Anglesy and Beaumaris, where we visited the prison and the court house, boy am I glad we weren’t around then, punishments were pretty harsh, I love my history and I learnt a lot, especially about our penal system. 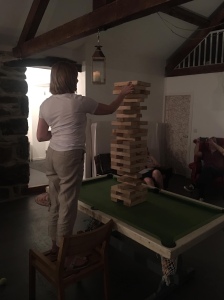 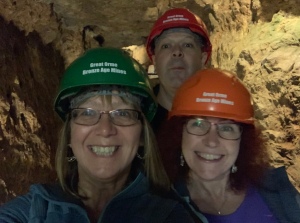 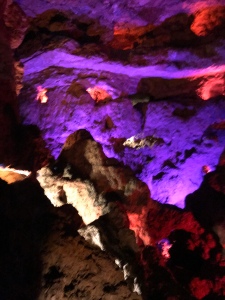 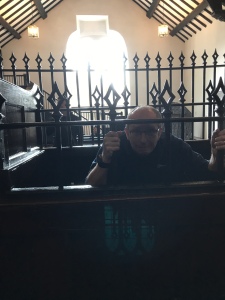 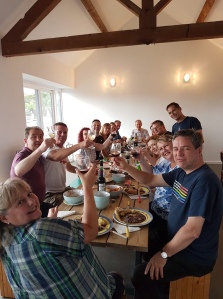 Finally it was that time again, scans and results, and luckily there was only a week between the two.  It is always a time of unease, especially once the scans are out of the way, I have never been one to much about my scans as what will be will be, but the night before results day is always a restless one.  Thankfully the results are good, the PRRT seems to be doing its job as far as the tumours are concerned.  My primary, aortic and liver tumours remain stable and there has been a small reduction in the tumour on the peritoneal wall.   There is a good chance that the PRRT will continue working for another 12 months, so hopefully we may see some more shrinkage, but I am more than happy to take stable.

10 thoughts on “Riding the Wave and YAY to PRRT”