Where has the time gone, it is hard to believe that I have been knowingly living with NETs for the last 3 years. 22ndJune 2015 was the day I learnt that I wasn’t going mad, I wasn’t imaging my symptom’s, I wasn’t a hypochondriac…  I really was ill and I wasn’t going to get better. As the un-invited aliens had already planted their flag, gone exploring and found new places to settle, there was no cure for me.  Just treatments to manage progression in the best way possible to hopefully discourage any of my aliens from reproducing and exploring further.  So to this end on Monday I had my 37thmonthly jab, and long may they continue as I am not done with life yet!  I don’t have a bucket list, but I do have a wish list and hopefully over the coming years some of those wishes will come true.

So as mentioned in my last blog my scans went to the MDT meeting at the end of May, and my consultant rang afterwards to let me know that they had looked at the last 3 years worth of scans together and confirmed that there is evidence of some progression in the liver.  Consequently they wanted me to have another gallium scan, to get a new baseline, my last one of was in October 2016.  This was booked for the 13thJune and this latest one will help them to decide if the time may be right to consider going down the PRRT route. Ironically enough it will be discussed again at the June MDT which is also today, 22ndJune, and hopefully I will know the outcome in the next couple of weeks, so fingers crossed. Anything that may help me reduce my painkiller intake and hopefully up my energy levels will be gratefully received.

On a happier note I am loving this warm weather, not so much the muggy nights though.  The warm sunny days have definitely given hubby, me and the garden a boost and we have been able to do quite a bit of tidying up, the blueberries are starting to ripen and there are even flowers on the tomato plants.  After a slow start, everything seems to have suddenly gone into overdrive.  I am amazed by the speed at which the tomatoes have come on in the sun as last year nothing much happened with them until late August, and then I had to pick them all green and ripen off in the conservatory, still made good chutney though;-) Fingers crossed we will have a steadily ripening supply throughout the next couple of months, I know this is England, but stranger things have happened!! 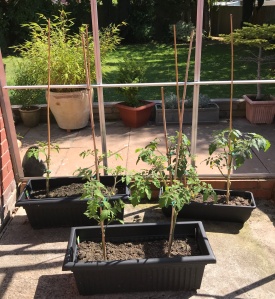 I also discovered this month that our Buddy bear does not like thunder, we got caught in a storm a couple of weeks ago and I thought the poor boy was going to have a fit.  He is a bit of a wimp when it comes to unfamiliar noises, but you could see that he was genuinely scared.  Luckily we hadn’t gone to far before it started, so we were able to get back pretty quickly, although we did get absolutely drenched.  He also continues to be a thief, a stealthy and selective one at that, he is also quite choosy when it comes to his response to the recall command.  So today he has had his first 1-2-1 training session with a trainer who is experienced in working with rescue dogs in an attempt to get him be more responsive.  He did good, he is definitely a clever boy and the first session concentrated on getting and keeping his attention properly. It was hard work for him both mentally and physically but he quickly learnt the rules, when we got back he went straight to sleep with a belly full of treats.  He has another session next week!

The first full week in June turned out to be a very busy one starting with the local NET natter, and this time I didn’t miss it! It’s always lovely to catch up with everybody and be able to chat with people who fully understand what is happening to you and how it effects you.  My friend Shelle also came along to do a talk about the benefits of yoga, and to demonstrate some easy relaxation techniques.  It was very well received and I think I can safely say we were all relaxed after the session.  The plan going forward is to get a yoga workshop set-up to introduce some gentle yoga exercises for anyone that is interested. After the session Shelle then had to shoot off to collect their new puppy Willow, a black and white Springer spaniel, who we got to meet on the Sunday.  Far to cute for her own good it was love at first sight, and this Wednesday she was introduced to Buddy.  Brings a whole new meaning to little and large, and we hope they will be great pals as they will be doing a lot of outdoor activities together. 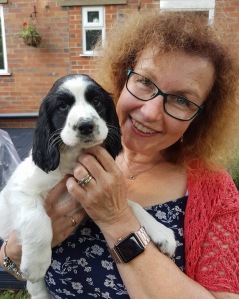 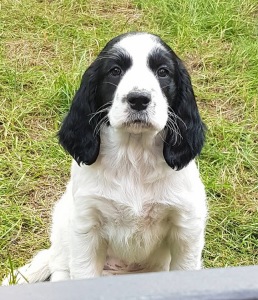 The following Wednesday I attended a short course called ‘An Introduction to Living Well with Cancer” which is run by the Penny Brohn cancer charity. It was very interesting, as the focus is not so much on medical support, there is plenty of that out there, but the holistic approach. They take a whole person view that recognises that those of us affected by cancer need more than just medical intervention, we also need “care for the mind, the spirit, the emotions, the heart and the soul”. Helping us to focus on what matters to us as people too and how this works alongside any medical treatment. It is an area that can often be unintentionally neglected, by ourselves as well as our teams. The Penny Brohn approach is called “The Bristol Whole Life Approach”, and there are free courses available across the country.

The first time I heard about this charity was at a NET Natter meeting, as Penny Brohn in Bristol hosted a retreat last year for the NET Patient Foundation. If you would like to know more check out their website (there are also local Facebook support groups), they are definitely worth a look. I have signed up for the full two day course local to me in July, after all every little helps. Furthermore, this is not just for cancer patients, it is also for supporter, carers and family.

The following Saturday I hosted a Tropics pamper party with Lynn, which included homemade cakes and tea in proper china teacups.  It was a lovely afternoon, and as there were only a few of us we all got a facial and a pamper.  Yes I am completely hooked on this stuff, there was so much I wanted (well the lot actually), I was like a kid in a sweet shop.  I did manage to replenish my supplies and had a couple of extras, I am now saving up for more goodies:-) Buddy of course was in full Fagin mode too pinching Lynn’s Tropics scarf, which he did kindly model for us after, and Shelle’s sandal, quite possibly because nobody was willing to give him cake. 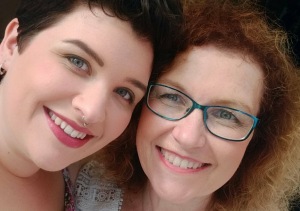 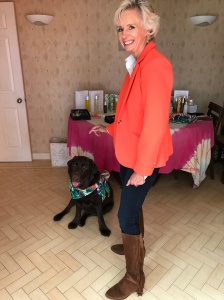 As a consequence the following week I spent a lot of the time not doing much, you play you pay as they say, but it is always worth it, and I still have a long road to travel.  To be honest though at times it can be a very lonely road, I am very lucky and thankful to have a strong support network around me made up of family, friends and various help groups/forums.  Boy does it mess with your head at times, for me it’s usually when I am over-tired and had a long period of discomfort to deal with.  It is what it is though, and things could be a whole lot worse.

12 thoughts on “3 Years and Counting”