My back continues to creak but the yoga is definitely helping to ease thing and keep me flexible, and my balance is improving as I can now stand on one leg in the shower without falling over. Good deep sleep remains consistently unreliable, although I have found that lavender oil is definitely helping.  I had some little bottles of pillow spray that I had picked up from a hotel a good while back and had noticed that when I did use it, the gaps between walking up were longer. So last week when I received my free cancer kit from the Cancer Support Organisation I was delighted that it included a big bottle if lavender pillow and body spray amongst many other useful bits and pieces. If any of you in the UK would like to apply for one for yourself or a loved one with cancer this is the link Cancer Support Cancer Kits .

Following 3 more urinary tract infections I am now back on the daily antibiotic for 6 months, it is definitely my weak spot. Although something must still have been lurking around after the last lot as 3 weeks after starting them I have ended up on a full weeks course which I am just finishing, so fingers crossed things will now behave themselves. As a result of this I have now upped my probiotic intake to help with the onslaught and keep my guts healthy, as well as starting on some B12 after reading an article shared by NPF specialist nurse Nikie.  I would also recommend that you give Ronny Allan’s blog on Vitamin and Mineral Challenges a read too, to understand how NETs can impact our absorption  of these. For now though the stronger probiotic supplemented with B12 seems to be having a positive effect, as in myself I am feeling a lot less out of sorts.

We also embarked on our annual walking weekend with friends, a bit earlier in the year than usual. We went to Wirksworth in the peaks, and this time self catered. We hired a lovely big house in the centre, which had previously been old the council offices for a while, it was a great venue. We even had a sauna and a cinema room. On the Saturday in the day we did a very damp walk around Carsington Water, and in the evening played a murder mystery game. Brief synopsis is – The Lord of the Manor, Lord Heathcliffe, had been murdered on the day of a dinner party to introduce his new young bride to his friends, and we had to ascertain who did it. Everybody is given a part to play with costume suggestions.  I had the part of the housekeeper Mrs Withering, who as it turns out had been secretly in love with Lord Heathcliffe.  As there were more men than women in the group one of them (Mart) had to play a women, so Mart ended up with the role of the cleaner, Cinders!! 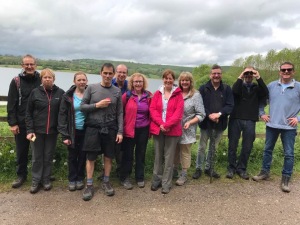 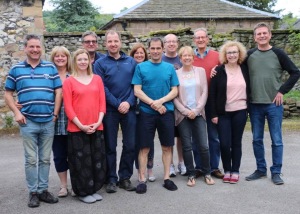 There was also a cook – Blanche Batters, a psychic, – Misty Visions, a general – General Custard, a doctor – Dr Fumbles, a professor – Prof Peacock, a policewoman – Sierra Tango, a professional musician – EM Fatale, a butler – The Butler, a driver – Ford Escort and a vicar – Rev Will Beedone. We all drew a card to see who would be the guilty party before the game began, and we all had a script to follow with questions and responses.  Your responses depended on whether or not you got the guilty card.  Much to our shame though the culprit played their part so well none of us guessed it, or should I say listened carefully enough to the responses. Turned out it was the vicar, who was the Lord Heathcliffe’s younger brother.  It was great fun:-) 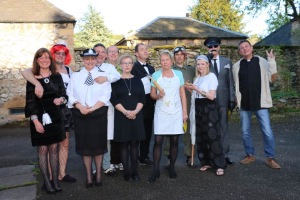 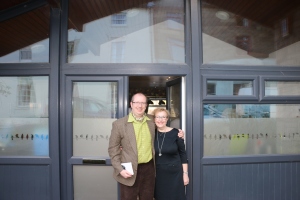 On the Sunday the weather was a lot better and we walked around Wirksworth following the heritage walking guides, guided by Richard, who did such an excellent job we think he may have found a new career for himself now he has retired. We finished off with a meal at one of the local eateries, and returned home on the Monday. 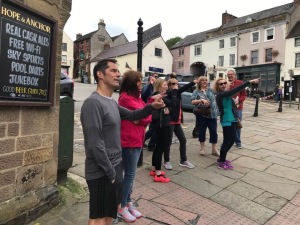 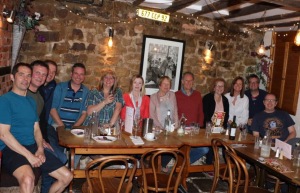 On Tuesday 23rd May, I went to the NET Patients conference in Birmingham. I met a few new people, and caught up with a few others from last years event, and of course our lovely Nikie was there too.   It was very informative, and I especially enjoyed the talks on ‘Identifying Symptons’, and ‘Carcinoid Heart Disease’ . There seemed to be a lot more people there this year too, which was good. If you get the opportunity to attend one I would recommend that you do.On the Wednesday I was back at the Christie in Manchester for my latest set of results, the busy weekend and the conference had helped to take my mind off things.

As I had been a subject of the MDT at the end of April I was pretty apprehensive about what I was going to be told. As I hadn’t heard anything directly after the meeting I knew that if any surgical intervention had been agreed on it was not urgent. I had already spoken to the team before the meeting and we had agreed that I would get a full update with my results at my next appointment unless they needed me to come in earlier. Still doesn’t stop you thinking about stuff before hand…

Thankfully I was greeted with my favourite phrase “all remains stable”,  and in the meeting it had been agreed that the surgery discussions will be put on the back burner for now, unless my body decides otherwise.   I already have a lot of scarring form previous surgeries which doesn’t help matter, and if they do have to go in I stand to loose a large chunk of my insides, with no guarantees that it would improve my quality of life. So, as most of the time I can manage with medication to control my pain we will continue as we are. The monthly jab is doing its job as far as my aliens are concerned, in that they are not getting bigger, and long may that continue. Also, touch wood, I seem to be going through a fairly stable period all round at the minute, pain is minimal, so pain med consumption is low, and I can function more or less normally for with little intervention on the drugs front.

Even better though, I have been cleared to visit my daughter in Canada, and have a letter to prove it. So my main focus at the minute is staying well for that. I don’t need to back for 6 months, late October I will have both my CT & MRIs done, then get my results beginning of November. If I do have a recurrence of a severe episode of bloating and cramping before that though which does not readily respond to pain relief, I must go straight into the Christie, nowhere else. My consultant is quite adamant that they do not want anybody else messing with me, the team there know what’s what and what needs to be done. I take great comfort from that.

Following the good news, we then followed up on the Bank Holiday weekend with a family meal out for our youngest sons birthday. As he is now based in Leeds, it was nice to get most of us together to celebrate it.   We went to the local Thai restaurant, and most people came back to ours afterwards for a few drinks and cake and watch the blue tits live. As a surprise I had made Ryan his favourite birthday cake, and our grandson Arthur experienced his first big family meal out. He behaved very well, and willingly tried most of the dishes on offer. Early the following morning however the blue tit chicks had flown nest, they were all tucked up in the box when we went to bed then next morning when we came down the box was empty. We were very proud of mum and dad though as all eight chicks survived to fledge. 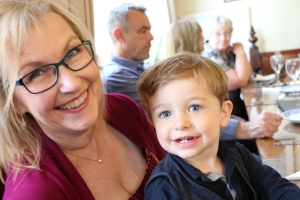 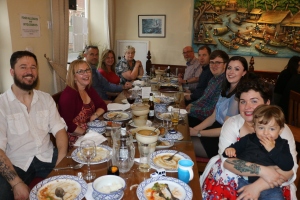 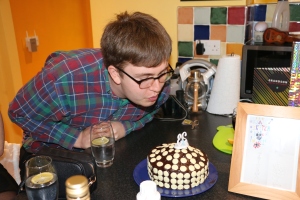 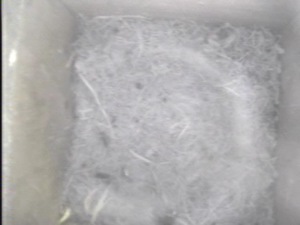 I was also hoping to give you an update on the ‘Race for Life’  n this blog, but unfortunately it got postponed due to bad weather. When I got the notice that it was being postponed I thought they were being a bit over cautious, but as the day went on I realised that they had definitely made the right decision. We will now be doing it on the 20th June, the plus side to this is that it allows more time to raise donations on behalf of cancer research uk.  I don’t think the rain really stopped last week either, it did slow down and the gaps between the showers got longer, but there was a distinct nip in the air.

Last Wednesday was the volunteers’ picnic at the The Donna Louise Children’s Hospice; we started off in the garden but the rain got us so we had to move inside. That said, it didn’t spoil the fun and I am happy to say even though we got nothing in the bingo, our table did win the quiz.

We finished off last week with a trip to Liverpool with some friends to see the “Illegal Eagles”, we are big eagles fans, but have never managed to see them live. We had heard good things about the cover band, and I can confirm that it is all true. I must admit here though that we did arrive late, the tickets said 7:30pm and thinking that meant doors opened, and we ambled up just before 8pm. It didn’t help that we were only 3 rows from the front, thankfully nothing was said as we skulked into our seats, and I have no idea what songs we missed, but it didn’t matter as I am happy to say we had a brilliant night. 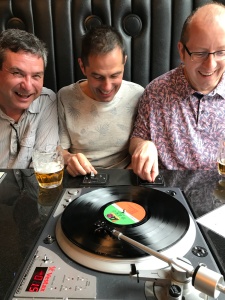 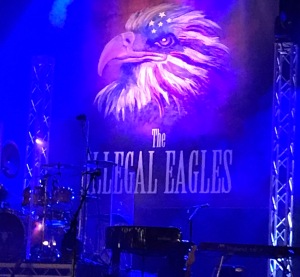 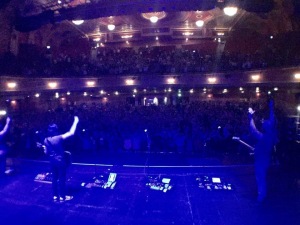 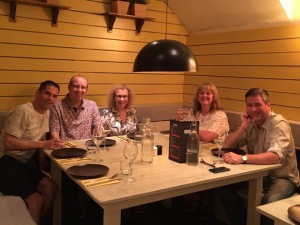 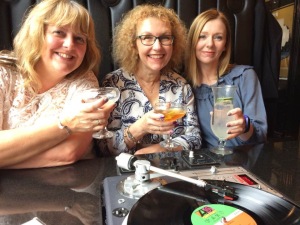 The Road to Personal Advocacy

Professor of Surgical Oncology at the Baylor College of Medicine