Over the last few weeks I have been in a bit of grump, nothing major, but a general feeling of lethargy seems to have settled over me. I just cannot be bothered to put to much effort in to doing stuff, and when I do there seems to be a big sigh attached to it and an element of eye rolling. I am slightly fed up with things, on the outside I am mostly my usual positive self, I think!   I am also hoping that this is just a combination of the end of winter sluggishness, as well as the fact that I am missing my four-legged companion.

The house seems so empty and quiet without her, and going for a walk on my own feels strange, although the sun over the last couple of weekends has helped, getting me outside and walking which always lifts my mood.  Don’t get me wrong, I have got things done, but I have really had to give myself a good talking too some days.

My stomach continues to be sore, and I am back on the painkillers most days, it seems to be at it’s worst first thing in the morning and last thing at night. I did see the surgeon again on the 16th March, and she thinks the problems I am currently experiencing are coming from the lymph by my main artery, just behind my intestines. Inflammation here can cause similar symptoms to those of an obstruction. So she has recommended a review of my medication and thinks it may be worth going in for a look around with a camera to see if they can get a better idea of what is going on.  Also I have had a couple of surgeries for adhesions in the past, which can in itself aggravate things.  So my MRI that was scheduled for early May has been brought forward to next Tuesday, 18th April, as I am going to be included in the next MDT discussion at the end of April. Then we will hopefully see what is next on the agenda, so watch this space.

In the mean-time our youngest daughter and family have moved to a new house, and my friend Chrissi came for a visit too. We met as mature students on our second day in class 23 years ago at Preston University, and we haven’t been able to get rid of each other since!! We didn’t do much as my energy levels were very low, we are never short of something to talk about though.  But I did abandon her one night for a few hours as I was facilitating some training at the hospice, which I really enjoyed and found very interesting.  I even got her to make make the evening meal, thanks Chrissi your a star🌟

We have managed to get our outfits sorted for the Dance for Life too, which we are doing in Leeds this year on the 6th May, we have decided on an 80’s theme with multi-coloured net tutus, pink fluorescent accessories and leggings with a zebra stripe.   I will post pictures in my next blog.  I have also signed up for the Race for Life 5k on the 6th June. My daughter Judith has set up a Team Zebra, so I think most items from the Dance for Life outfit will get another airing for this!! I will be walking though not running.  If you would like to sponsor us this is the link – Team Zebra

In an attempt to get ready for the Race for Life I had what turned out to be not a such a good idea, I thought I would start doing the ‘Couch to 5k’ and surprise Judith on the day by running with her. This was a big mistake, my first outing on the Monday went really well I thought, I didn’t feel to bad afterwards, stomach was a bit sore but nothing to bad, for me that is. So I was full of enthusiasm at the start of my second outing on the Wednesday, however it was not good, I started off ok, but halfway through I was really struggling, when I got home I was very shaky, lightheaded and felt sick for most of the day and boy was my stomach sore. The following two days I felt absolute rubbish, so needless to say I will not be continuing with it, I think I just will stick to walking.

Zebra’s featured quite heavily this month, I know a lot of people are not into the zebra as a symbol for NETs, but I like them and always have. So along with the leggings I had some socks and cushions. I have always drawn the line at zebra or should I say animal prints in general for soft furnishings, but I couldn’t resist the cushions, it was only two and we did need some new ones…

I also made a start on cutting out my templates for the my butterfly quilt, and believe you me that is no small task, there are 42 of them. One of my NET friends, Janny, very kindly sent me some quilting squares which included some zebra print, so I may try and incorporate that into it too. This is my first attempt at patchwork quilting, I have done a rag quilt and a Christmas Advent calendar, but I though it was time to try something bigger. Fingers crossed I haven’t over stretched myself with this project.

You may also remember that last year I mentioned that I had been asked to contribute to a US magazine that was doing an edition focussed on NETs. This has now been published and I received a PDF copy of it last week, and here is a link to it if you fancy a read. It is distributed free to doctors surgery in the US and has been sponsored by the Carcinoid Foundation – https://www.carcinoid.org/ 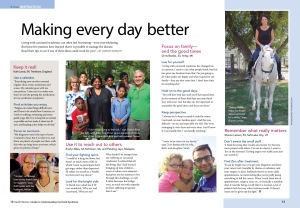 Then last week I had the pleasure of wearing a blood pressure monitor for 24 hours. It felt like I was doing the mannequin challenge every 20-30 minutes, it generated some strange looks when we were out shopping, and it was not conducive to a good nights sleep either, but at least it only went off once every hour at night.   Results should be in a couple of weeks, so fingers crossed my high blood pressure readings during late January and early February are only a blip related to my cramping and bloating episodes.

Finally, for the first time in three years we have a blue tit nesting in the bird box with a camera. My husband put a replacement box up four years ago as the camera had broken in the old box, we had birds in the old box every year.  We had birds in the new one the first year but nothing since. So we are delighted that they are back, hopefully we will get some chicks too. 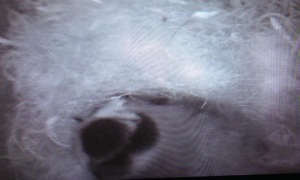 Have a lovely Easter