This blog starts with my birthday, it was my second as a Net cancer patient, and also marked the halfway stage between 50 & 60!  I had a lovely day, it was quiet, but I got lots of lovely presents, including a set of zebra cups on a tray which are a limited edition. I know I should use them, but a part of me wants to put them on a shelf for display. Hubby took me out for a lovely meal in the evening, and I felt properly spoilt.  Although my stomach was getting sore 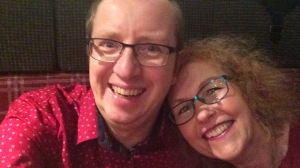 It was in fact a busy few days for birthdays, the day after mine was my son-in-law Kyle’s 30th, and then the day after that marked my brother’s 70th.   My daughter Judith had arranged a surprise Viking party for Kyles 30th on the Saturday, and we were on babysitting duty. So on the Sunday I did a celebratory Sunday lunch, and even though this was for Kyle, with some of his favourites food, the undisputed star of the show was Arthur. Especially when it came the to butterscotch apple tart with custard!!!!

It was a busy day, and by the afternoon I was flagging, I knew I would be tired but my stomach had been getting sore and starting to bloat over the last few days. So after everyone had gone I had a hot bath and went to bed, there wasn’t much sleep for me though that night. I didn’t have really bad cramping, but I was back on my painkillers and heat pack hugging. By Monday morning I had no energy for anything, I looked about 8 months pregnant, couldn’t get anything to fit around my waist and hips so spent most of the day in bed.  Needless to say the next few days were spent sofa surfing when I managed to get myself out of bed. I wasn’t eating much either, it was more a case of eating because I needed to, not because I wanted to.

On the Tuesday I rang my specialist nurse, explained what was happening and sent a picture of my stomach, I have included a normal picture for perspective.

As this had been building over the last week I wondered if this could be classed as a live episode.  My nurse spoke to my consultant and the surgeon and I was called in for a scan on the Thursday. All I can say is thank god for leggings and baggy tops.   I am hoping to get an update next week , which I can then discuss on the 1st March when I next see my consultant in person.  I am  working on the principle that if they had found anything that needed immediate attention I would have heard by now.

On the Saturday, I went to Huddersfield with my daughter Judith on the train to meet up with my sisters and nieces for a long overdue get together. It takes a lot of planning to get us all together. We had a lovely day, my stomach was still bloated but I had a loose dress that fitted, and I was determined I wasn’t going to miss it.  I was a bit shaky and tired on the way home, but I used the Sunday to recover. I have also noted that since this my blood pressure is a bit on the high side at the moment. So I am keeping a daily record for the next few weeks to take with me to my appointment.  I have also created a spreadsheet to capture all my episodes of this since diagnosis.  There has been a definite increase since August last year when I was off my feet for three weeks, so that will be coming with me to.

By the 9th February I was able to get back in my jeans, but a couple of days later I crashed and burned emotionally.   I cried all day, the tears just wouldn’t stop, I felt so frustrated, useless and lonely, and my hubby patiently bore the brunt of it when he came home from work. Believe you me, I was not the nicest of people to be around during those 24 hours…

This does happen every so often, but it had been a while since I had had a proper full-on breakdown. I know it is par for the course, but at the time it is happening it is horrible.  Luckily for me though, the next day I started to feel better. I think it is a bit like being a pressure cooker, every so often the pressure builds up and it has to be released. The only problem is I do not seem to be in charge of when the pressure will be switched on and the pressure released🙄

So on the Saturday 11th February my mate Shelle took me to Cheshire Oaks for some retail therapy. I am not really one of lifes shoppers but I had some birthday radley bag vouchers to spend, and I am rather partial to a Radley bag. I also got myself a zebra broach and notebook.

I need to watch my notebook purchases though, as I am in serious danger of acquiring more than I can ever use, unless I am going to write an epic novel by hand.

The good news is that I received my Net handbook, and this week I was able to get back to my volunteer work and the yoga is back on, I really missed it when I couldn’t do it for 2 weeks. I did give it a try, but my body was having none of it at the time.  If you fancy starting yoga, I would definitely recommend the ‘Down Dog’ app.

4 thoughts on “Getting back in my jeans”