It’s been a busy and interesting month, starting with us finally getting the decorator booked to do the hall, stairs, landing and downstairs loo. Had to change our ideas about a few things, and I still can’t find a wallpaper that we both agree on!! There is so much on offer out there, but boy is it difficult to pick one, we don’t want a big print, and floral has been vetoed too. But we have until mid July to get ourselves sorted, if we follow our usual course, it will definitely be a ‘by the skin of our teeth’ job.

The week of the first May Bank Holiday Ade was on leave, and we kicked off with a visit to the Gladstone Pottery Museum, a first for both of us, even though Ade is a local boy! It was a very interesting  and enjoyable visit, and best of all it was one of their free days. Last year it hosted an episode of the BBC’s ’24 Hours in the Past’, as well as being the subject of an episode of ‘Most Haunted’ in 2006, definitely worth a visit if you are in the area. Great for kids as well as there is lots of hands on stuff they can do too. 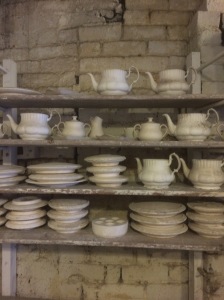 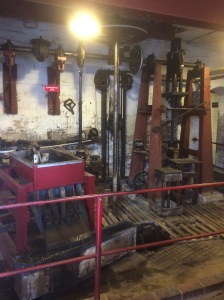 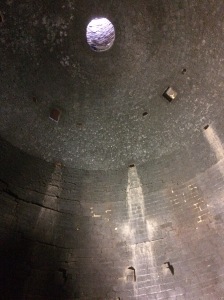 The rest of the week, it would be fair to say was fairly lazy as far as holidays go, however we did get a bit of tidying up done in the garden over a couple of days as the weather cleared up. But even that took its toll, on the Friday we were going to go walking, but unfortunately I was fit for nothing, and I had urine infection as well, so by Friday afternoon was I pretty much wiped out. This was especially annoying as it meant I had to miss a friends 50th birthday clelebration, however Ade did the honourable thing and had a great time for both of us!!

The sad thing that night though was that not long after he got back our dog Missy had a stroke, thankfully she has more or less made a full recovery, apart from a slight tilt of her head to the left and her balance can be a bit unsteady at times, but at one stage we thought we had lost her. Fingers crossed though that this is a one off and she will not have anymore, but there are no guarantees. For the first few days afterwards I had to hand feed her, the vet recommended a light diet of rice and chicken or fish which she took to like a duck to water.

She is very happy with her new diet, it knocks spots off the dry dog food.  Missy was never a greedy dog, but for the first time in her life she will now empty the bowl in one go. The other day I did put some of the dried stuff down for her, as she was throwing her food bowl against the wall for some more, lets just say if look could kill…

To be fair she is getting on a bit now, she was 13 last week, has gone deaf and has had arthritis in her back legs and hips for a few years. But she is a gentle soul and always has been, unless you are the post man, and we are not ready to loose her yet. But then again I guess you never are, but she is now also giving me some serious completion on the medicines front. 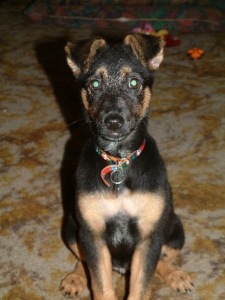 I have tried a couple of yoga classes at the gym, which I really enjoyed, as I have always loved yoga, but it is a good few years since I have done any, I was really tired afterwards though. I think two one hour sessions on the trot was maybe pushing it a bit, so I have started to build it up at home with a gentle 30 minutes most morning, and that seems to be ok. I have an app, like you do these days.

I am constantly trying to figure out the best approach to keep me active with out over taxing myself, I really don’t mind that I can’t do aerobic stuff, never liked it anyway. I would much rather walk or swim, and next on the agenda is getting back on my bike. I will not cycle on the road though, scares the living daylights out of me, our roads are not designed to accommodate motorists and cyclists side by side. Luckily we are by the canal, and there are a few nice cycle paths scattered about. So fingers crossed, and as my mother used to say, what doesn’t kill you makes you stronger, but not sure I believe that!

This chronic fatigue is a hard thing to handle though, and I do find it plays with my head big time at times. When I know I have been busy I can accept it to a certain extent, but when I can’t see any reason for it, it frustrates the hell out of me. But I imagine that is pretty much a universal frustration for anybody who suffers with chronic fatigue, whatever the reason, so I try not to let it rule my life too much.

On the 24th May I attended the NET patient conference in Birmingham, it was well worth the visit. I got to meet some very nice people people, as well as the lovely Nikie, the NPF nurse, and Kevin our local NET Natter group co-ordinator. Unfortunately I missed his talk about his PRRT treatment, as I had to leave, but have asked him if he would do it again at the Stoke meeting on the 25th June, which by the way is at the central library in Stoke. If anybody is interested in attending please let him know through the NPF events page.

There was a lot to take in, lots of stuff I already knew, but also lots of stuff that I didn’t, too much to go into detail here, and the day just flew by. I would encourage people to attend these when there is another one if you can. Although I will share this, there are estimated to be between 30-40 thousand of us living in the UK with this, but that they think there are a lot more out there undiagnosed.  Due to the nature of the beast, and lack of awareness within the medical profession. There are approximately 352,000 new cases of cancer diagnosed each year in the UK, of which 2000 are NET related. The highest is breast cancer with 54,000, so that puts us in the very rare category. As a result of this rareness, we are very low in the pecking order when it comes to research funding, as rare cancers are complex, challenging and expensive to research, so there is no agreed research pathway. Which to be honest I found quite shocking, the truth of the matter is that we are just not profitable.

Happy to report though that after communicating over facebook for the last few months, I got have a chat with the lovely Kat McGillan, not only were we able to share our experiences of our condition, its turns out we have loads in common too. We had a good long chat and I look forward to many more.   I also met up with Margaret Ward for a coffee, another lovely lady, who has been living with this for the last 12 years, and is literally 10 minutes down the road from me. So I look forward to many more coffees, and maybe the odd glass of red wine. It really is good to be able to sit down and speak with people who fully understand what its like living with this, as it helps to remove some of the craziness of it all.

Finally we have booked a sun holiday to Lanzerote, never been before, so looking forward to that. Not quite Canada, but it will do for a start.