So, following on from my last post I continued with my return to work, in that I did another two days the following week as part of an agreed gradual return to work plan. However, I quickly realized that only 10 weeks after diagnosis and still getting used to my medication, as well as the prognosis, I was probably expecting a bit to much of myself. The fact that I spent most of the first day of the second week in the loo, helped to emphasise this.

I had discussions with HR and my bosses, and agreed that after completing the second day that week, I would take my two weeks booked leave and make a final decision with regard to the rest of the year. So I did my second day as, I had a couple of meetings and other people I needed to see, then went off on leave.

Leave started with the Foo Fighters concert in Milton Keynes on the Saturday, a dream come true, I have wanted to see these guys live for years, and they were definitely worth the wait. Although I must say that the chair they had made for Dave Grohl (due his broken leg), did remind me of something out of Dr Who!! Thankfully my stomach behaved itself, which was good as concert toilets are best avoided for as long as possible, and the less said about the hotel the better. Lets just say we would probably have been more comfortable in a tent.

Then it was home to pack for our holiday to Cornwall on the Monday. The destination should have been Las Vegas, for my son’s 30th birthday, but I decided that it was probably not a good idea for me for now, so they went without me😒 We had agreed this was the ideal place for the celebrations when we were there a couple of years ago, we loved it and I fully intend to go back one day.

Back to Cornwall, it was definitely the right decision, we booked a flat in Penzance on the prom, the view was fantastic and I love being by water, especially the sea. 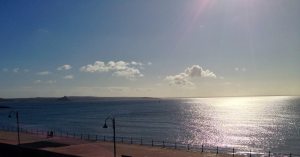 We were so lucky with the weather too. On the Tuesday we did nothing, apart from a short walk into the town centre, followed by a walk into Newlyn to get some gluten free fish and chips from ‘Lewis’s Fish and Chips’! No relation, but definitely worth the walk. It also gave us chance to get our bearings and decide on what we wanted to do. I had printed out some local walks (leaving nothing to chance this time!!), and on the Wednesday we did a 12 mile round trip coastal walk to Lamorra Cove via Newlyn and Mousehole, with regular stops for refreshments.

The weather was just right, sunny with a slight breeze, and only one steepish incline.

On the Thursday, I was very tired so Ade went on a bike ride to Lands End leaving me to my own devices, which mainly included reading and enjoying the view. Friday we went to St Micheal’s Mount by bus, and were able to walk across the causeway to get there, and get the boat back. Originally the site of a Benedictine Chapel founded in 1044, the castle that is there now dates from the 14th century. It is a great place to spend the day, lots of history, lovely gardens and great views. 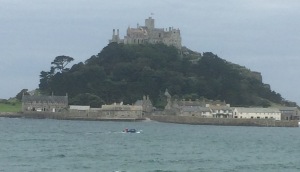 Saturday was the first day we actually used the car, as we drove over to Sennen Cove to do the walk to Lands End, this was not a long walk (3.5 miles round trip),but the views along the coast line were out of this world. 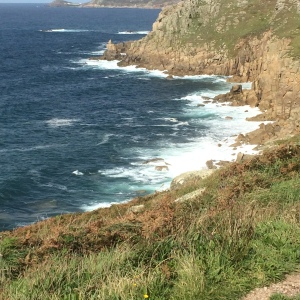 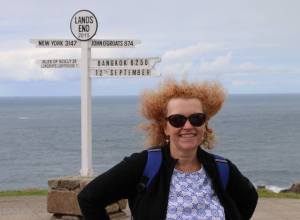 Sunday was pack up day as we had to be out early Monday morning, so we went over to St Ives, but we didn’t meet a man with seven wives;-) It is a lovely little coastal town, but boy are the hills steep, walking down into town from the car park was a breeze, walking back up was a challenge, but I did manage to get myself a gluten free Cornish pasty. It was worth the walk:-)

On the Tuesday after we got back I was due to have my third injection and I was ready for it, from the Friday my stomach was getting sore, knowing where the toilets were was becoming very important and my flushing was ramping up, the drive home on the Monday involved lots of service stops. Luckily though I don’t need to go to the doctors to get my injection done, one of my very good friends is a nurse and has very kindly taken up the gauntlet for this, she is also going to teach my husband how to do them, which will make life a lot easier.

Post injection, my response has pretty much followed the same timeline as my last one, and I am back to see my oncologist on the 5th October to get my test results and next prescription.

With regard to thinking time and making decisions, I have now been signed off for the rest of the year to give me time to get used to the new me, and I think it is for the best. I feel like a weight has been lifted. I am I admit a person who likes to be in control of things, always planning and organizing, I hate letting people down, both personally and in the work place. One of the hardest things for me to try and learn over the coming months is to let go. Just because I am not in charge doesn’t mean that things won’t get done, just because it isn’t in the diary 12 months hence, doesn’t mean it isn’t going to happen. In the workplace I would call it managing expectations!

As I have said previously, it’s just as well I like a challenge, just never thought that my biggest challenge would be managing my own expectations…